I love the NHS. Really, I do. What’s not to like about free healthcare?

Well there is one thing- a hospital in South East London who are just living in another world entirely. Here are some excerpts and sketches from my interactions with them. For legality’s sake, I’ll give them a code name. Let’s call them Cing’s Kollege Hospital (Henmark Dill)

The story starts with my broken foot. I couldn’t be put in a cast until I saw a specialist. Even though I live spitting distance from St. Georges, some bright spark at my GP’s office thought that a hospital an hour and a half away (Cing’s Kollege) would be a good place to refer someone on crutches.

4 days went by and I hadn’t heard anything from Cing’s Kollege. I called to see when I could get my cast. And so we begin…

Them – “Well yes we’ve received your referral, but it’s going to be at least another 4 days until anyone reads it! After that it will take two weeks and then you’ll be contacted with a date for your appointment.”

Me- “Oh I thought it would be a bit quicker than that. My doctor said it was an emergency referral.”

Them – “It is! That’s the normal wait time for a ‘rapid’ and ‘emergency’ referral.”

Me- “I’m not sure you understand what either of those words mean.”

Dr – “The good news is the fracture seems to have healed!”

Me- “In the time it took me to get an appointment with you and get a cast my bones healed themselves?!?”

Me- “I brought a sock that I colour coded with markers so you can see exactly where the pain is and what type of pain it is.”

Dr- “Please put that away. I don’t want to see it”

Dr- “Why are you crying? Stop crying, I don’t understand why you are crying. Why are you upset?”

My next run in was when I was trying to get an orthotics appointment. I got a letter saying to contact them within 14 days of the letter’s date. The letter arrived at my house 3 days after the date on the letter, and the majority of the remaining 11 days fell over the Christmas and New Year period, giving me only 5 days in which I could book the appointment. I was out of the country for all 5 of these days. I phoned up as soon as I was home (3 days after the deadline to book an appointment) and the department was still closed, so I left a message explaining the situation.

I then received a letter from the department saying because I ignored their letter, I was being sent back to my GP and would need to be re-referred. I explained the situation to my GP who re-referred me, but then sent me a letter in the post saying the hospital rejected his referral as I lived too far away. Today I got a letter from the hospital telling me I ignored their offer of a second appointment. I phoned up to ask why I never received a letter offering a second appointment, and why they lied to my GP.

Me- “Which spelling of my name did you want – the one you use in conjunction with my address or the one you address the letter to? It’s Pulham with the address, but you start the letter ‘Dear Miss Pullman.’ The two names are written on the same piece of paper, approximately 1 inch away from each other. And yet they are different.”

Them- “I’m sorry, we have no record of receiving a referral for you.”

Me- “You must have, otherwise why would you keep sending me letters saying I’ve been referred to you?”

Me- “I am getting letters from you. They are here. I have them.”

Me- “It just takes the piss that you flat out refuse to let me have an appointment that I’ve twice been referred for, but yet continuously send me letters reminding me that you don’t want to see me”

Them- “We’ve never sent you any letters.”

Me- “Yes you have. I’m holding two of them in my hand right now.”

Them- “Oooh that is a bit far. That’s not in our catchment area.”

Me – “But it was in the catchment area a few weeks ago? You sent me a letter saying I could have an appointment. You sent it to my house so you must know where I live.”

Them- “You ignored that letter…..”

Me—“No I didn’t. We talked about this. And even if I did ignore it, I haven’t moved house since you sent it.”

Them – “It’d be better if you went to another hospital. It’d be closer, so it’d be more convenient. You’re not going to get an appointment here” 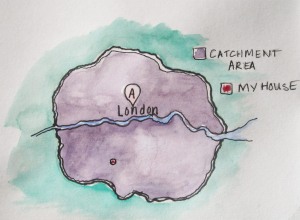 It’s times like this that I wish I had an old-school non-touch screen phone with a cord so I could slam it down to end the phone call. Hitting ‘End Call’ doesn’t have the same effect.

Trying to get the staff at this hospital to understand common sense is the real life equivalent of trying to explain algebra to a dinosaur.

I cannot win, but I will make sure I carry a laminated card with me at all times saying “In case of Emergency, do not take me to King’s College Hospital.” (Ooops.)