As somewhat of a connoisseur of Hidden London’s underground tours of abandoned London Underground stations, I’ve seen some excellent historical sites in my day. However, even I wasn’t prepared for the treasure trove of historical information and preservation that is London’s abandoned Down Street tube station.

Down Street is possibly the best visit of what is an impressive roster of sites. This abandoned station on the Piccadilly line was host to both tube passengers and government VIPs in the many chapters of its existence – and some of its secrets are still being uncovered (including an excellent theory on a highly secretive alcove which has been all but erased from history’s blueprints [and also from actual blueprints.]) 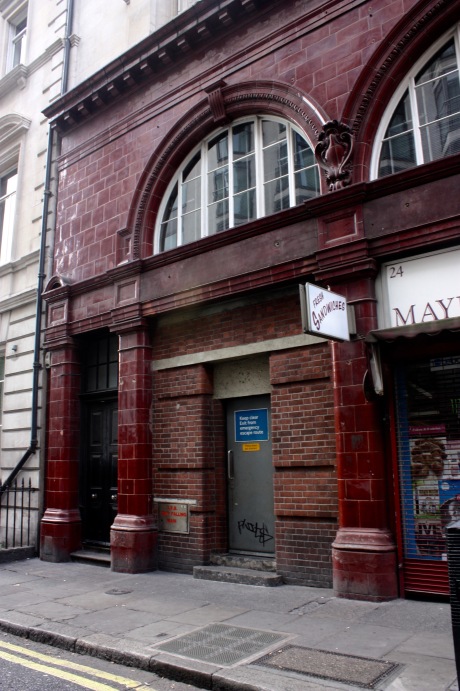 Down Street station was originally part of the Great Northern, Piccadilly & Brompton Railway – today’s Piccadilly line – and was opened in 1907. The original station building is a Leslie Green station, with its familiar oxblood tiles and sweeping arched windows on the front of the building.

From the beginning, Down Street was not a successful station. It sits in extremely close proximity to both Hyde Park Corner and Green Park stations and was drastically more difficult for passengers to find. Given the expense of property along Park Lane, the station was sited on a small side street with no signage on the main road. Further more, the “depth and lengthy passageways” made travel inconvenient and few passengers chose to alight to or from Down Street (LTM Down Street.) In 1932, the two neighbouring stations (Hyde Park Corner and Green Park) had escalators added into their stations and their entrances moved even closer to doomed Down Street – a final nail in the infrequently used station’s coffin. The station was closed to the public on May 1932, but the structure was retained to act as a ventilation shaft.

The second breath of life for Down Street came in the advent of the Second World War. The Railway Executive Committee was in need of a safe space to work and manage the railways should England and London be subject to heavy bombing (an extremely wise bit of forethought.) Thus, in 1939, Down Street was suggested and approved as the wartime HQ of the REC. In order to get the site ready, a massive telephone exchange with 50 telephones was installed in order to stay in constant contact with the government. Rooms were built in the abandoned corridors and along the platform to allow for offices, typists, meeting rooms, bunks to sleep in, bathrooms and even a restaurant/dining area with wallpaper and caviar!

In late 1940, Down Street received a very special guest as Prime Minister Winston Churchill moved from Downing Street to Down Street. The Prime Minister reportedly slept in Down Street station for a period of forty days and following his experience, more tube stations were converted to deep-level shelters (one of which you can read about here.)

The tour starts from a very unassuming grey door facing into Down Street. The entrance to the station takes us straight into a staircase that is full of information and clues as to the station’s multifaceted past. The staircase we take down has original oxblood station tiles mixed with yellow wartime paint. Crumbling walls give way to war time directions and there are a maze of staircase options in order to circumvent certain important war rooms. 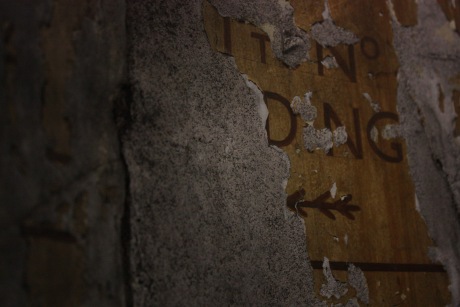 Many of the tube station’s features are still there and well preserved despite the war effort rebuilding works. The arched and tiled ceiling still remains – and in the passengers’ walking tunnels, it looks exactly as an early 1900s tube station should look.

The tour goes through every possible passable site and, wonderfully, explains exactly what went where during the war. Excellent historical photos are placed at every stop to show exactly what was where and when. It adds to the atmosphere wonderfully and absolutely enhances the experience in the tunnels. Many of the war rooms have been dismantled, but the guides do a superb job of pointing out the hints of history – where walls were connected, the marks left by protective ceilings, where hallways gave way to hideouts.

The telephone exchange is a wonderful part of the tour. After the war, the structure must have been too problematic to carry out (or perhaps, given the two world wars in reasonably quick succession, it was left in case it was needed again) so the telephone exchange still stands, alone and covered in dust, in one of the dark rooms. 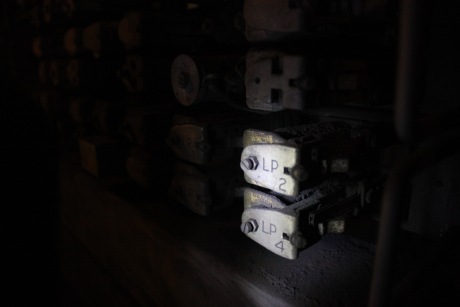 This leads on to another really enjoyable sight on the tours. Our guide, Nick, is especially enthusiastic about all the abandoned electrical fittings and delights in showing how the fixtures act as reference points to show how the historical images on display line up with the real life sites that we are standing in. I must admit, I share his enthusiasm for these electrical relics, and the light switches become fast favourites. 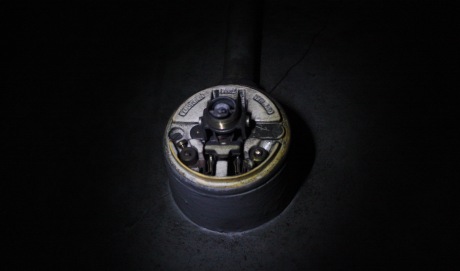 One of the eeriest parts of the tour is the WWII bathroom remains. It is exceptionally dark in the small box rooms that hosted the bathrooms, and so I wasn’t able to get any quality photographs. Most of the fittings seem to have been abandoned in place and we see many dirt smeared bathtubs, sinks – and even toilets.

As well as many winding staircases, hallways and ghosts of hallways, we also get to visit the bottom of the old lift shaft. The two openings for the lift doors still exist and we peer through them into the old shaft. Even this has a war time addition – a small sewage tank to hold the waste from the loos.

Amongst all the old tiling and signage, there’s a few modern touches as well. The station needs to have some current signage in it for workers (and also has glow strips on the walls in the event of emergency evacuation) hence this surprisingly modern sign below. Bonus points if you can spot all the reasons it couldn’t have been in the original station. 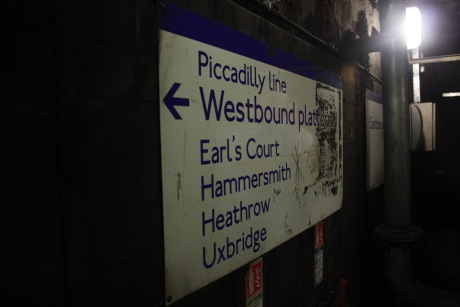 From the interior of the platforms you can also still watch the trains come by, as seen with a Piccadilly line train whizzing by below. As soon as we hear an oncoming train, all flashlights must be switched off so as not to scare the life out of the approaching train drivers (and passengers!)

The platform is bricked up along the edge but the bricks can be easily spotted by looking out of the right hand side of the carriage of trains passing between Hyde Park Corner and Green Park (and vice versa.) The end of the platform was left open in the WWII days to enable employees to discreetly board halted Piccadilly line trains – straight into the driver’s cabs! This portion of the platform now serves as an emergency exit.

It’s a wonderful place to visit for both war history buffs and tube geeks as there’s so much history to drink in whilst wandering through the warren of tunnels. For me, I’ll always love the original tube station features – fairly rare interior oxblood tiles, old train destinations and directions on walls, and the arched tile work on the ceilings. 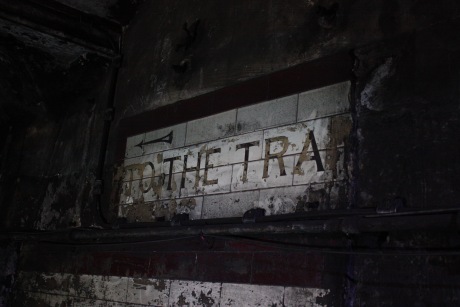 Down Street is one of the more difficult stations to obtain tickets for – and it’s the priciest station by a long shot – but it is absolutely worth doing, and is excellent value for money in terms of what you see and learn down underground.

Now, to the trains!