In what I assure you has been a truly strange week, I’ve been to two immersive theatre productions of Kafka’s writing. Last Friday I went to Fourth Monkey’s “Project Colony” in East India Quay, and last night, on the very enthusiastic recommendation of a friend, I went to see Retz’s “The Trial” at various locations throughout Hoxton/Shoreditch area.

“Project Colony” is based on Kafka’s The Penal Colony, a short story about a stranger traveling to a remote colony that still employs a particularly brutal method of capital punishment. It is described as follows:

“Meeting at a designated pick up point, the audience are escorted to the colony and once on the island, become part of the action as the inaugural colony tourists; witnessing the battle between the old establishment and the new, assessing for themselves the harsh realities for the inhabitants of this isolated and conflicted land.”

The cult-like atmosphere is very well done (with spooky echoes of 50s Americana.) There is something particularly ominous about how difficult to reach and remote the location is, and the actors play into this rather well. The explanation of the machine is very well described and shown, if not mildly over acted, but the overacting does lend itself well to continuing the theme of not questioning orders or authority and the blindly naive enthusiasm that both the soldiers and civilians on the colony seem to embody. The production presents itself in two parts, and incorporates a party setting (complete with games, entertainment, and a cash bar) mixed with an interestingly lit basement for an alternative setting.

Where “Project Colony” lets itself down is the over-ambitious overreach to incorporate modern issues into the experience. The Penal Colony book doesn’t touch much on the society surrounding the machine, and this experience tries to pick up where the book leaves off and present an alternate argument to the modern British society. It forces a weak attempt at convincing the audience of the benefits of living in this alternate cult-like society. Unfortunately, this ‘other’ side of the argument is not convincing. The rants about television, inclusions of bad dating stories and office life are amusing but miss the mark entirely when it comes to considering the horror of the machine and the issues of capital punishment.

Whereas “Project Colony” is a group setting with interaction very encouraged, Retz’s “The Trial” is (very correctly) the opposite- you go through the stages entirely on your own, your isolation adding to your emotions as you visit the different stages of the trial ‘procedures.’

The production is described as “The Trial maps Franz Kafka’s seminal story across East London’s nooks and crannies. Follow Joseph K through this immersive, large-scale, interactive story as he comes to terms with his mysterious arrest.
Over two visits you are lured into helping him. Through one-on-one encounters the complex reality of Joseph’s situation emerges, climaxing in the Department; a crumbling regime and at its centre a dark secret that will force you to question the true value of identity, and how far you will go to defend it.”

The entire thing is incredibly well staged- business cards, answering machine messages, and well-placed insignia contribute to a very complete experience. The locations (of which there are many throughout the walk- and be warned it is a walk, and not for the faint of foot) are entirely believable as the businesses they are meant to portray. The idea of identity is interestingly dealt with through the event- in particular I found how often I found myself readily divulging personal information to be quite poignant.

The actors are (for the most part) sublime, with the lawyer being a particular favourite. Characters are convincing and are very good at pointing you in the right direction and timing you appropriately. It’s a good mix humorous and eerie, and entirely believable as something that could be really happening. It was almost *almost* faultless. The only fault I found was with the ending.

Without giving too much away, the way the last ‘scene’ is set up is fantastic- believable, frightening, and very uncomfortable viewing (particularly if you are not someone comfortable with capital punishment.

The Trial, although it has a last chapter, is not completed as such, but does have a plausible ‘ending’ that could have been worked into the theatre experience. Instead, the end of The Penal Colony is subbed in for the end of The Trial, and I don’t think it resolves this theatre experience as well as this ending resolves The Penal Colony. The Trial is majorly free of machinery as both a book and a play, so it was odd to find the crux of the ending hinging on a machine.

Since both productions had the same ending it’s interesting to compare the way both handled their interpretations of it. I almost lean my preference back to Project Colony’s rather artistic spectacle of a finale-  which used rather basic elements to illuminate and  illustrate the end point. Retz’s room accurately portrayed the horror of the situation (sweating palms and gasps all around) but it was every so slightly let down by the ending not being particularly relevant to the performance. It may have been this unfulfilled feeling that led to me not being sure it was over (hint- don’t forget to look out from the bar to the parking lot afterwards), where as Project Colony had a rather decisive fanfare filled finale.

However I am fully aware that those who haven’t read either book may feel differently. Either way, 5 stars for Retz, 3 stars for Fourth Monkey.

Tickets are still available for both performances for the following shows, but book now as they both end this week. If you only pick one- pick Retz.

Below are ticket information and video links, as well as some top tips for each production

Project Colony– Don’t use the port-a-loo. If you must use it, bring truckloads of hand santiser and a flashlight. And maybe a gun. VIDEO

The Trial– I’m not sure if you’re supposed to eat the cracker? (I ate the cracker.) They keep your chalk names up afterwards. Keep an eye out for my name on the left wall- right by the door. VIDEO 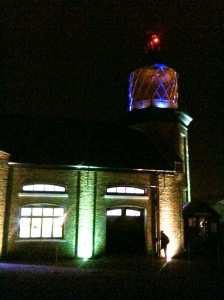