This week’s immersive theatre adventure took place in a (partially?) disused car park in Ladbroke Grove, which was allegedly the site of an alien space ship crash.

The project was put on by ImmerCity, who also put on the enjoyable Wyrd (read about it here.) ImmerCity are very much interested in a 360 degree spectacle, so prior to attending you are invited to read websites, watch videos, and follow the main character on twitter.

A UFO has crashed in an abandoned car park in Notting Hill. This bizarre object is being analysed by Crashed & Co, an independent company recruited by the government to investigate. There are currently no signs of any intelligent life forms. Crashed & Co has been granted exclusive permission to give audiences a once in a lifetime tour of the crash site. This company would like to assure any parties interested that nothing untoward should happen during their tour, as the situation is completely under control… This is not a hoax. This evidence is available to all. From the creators of the critically-acclaimed Wyrd comes an immersive experience that is out of this world! CRASHED is headlining at this year’s InTRANSIT Festival of Arts.

The performance is easy to find as the building is decorated from the outside to reflect the area being off-bounds. Groups are split up, which seems to be a regular part of ImmerCity productions, but the splitting up is not done evenly. Half of our group of 6 joined a group of 8-9; the other half of us were the only 3 in a different group. Odd.

Each group is led by a tour guide from the research facility (ours was really very good.) The audience is then briefed about a number of health and safety advice- some jokingly, but some worryingly serious (apparently the neighborhood kids often throw things at the crowds. Stay classy West London.)

The tour guides then walk you around the site while you learn about the research into the crashed space craft and see clues as to the involvement of Moon Man Max, who you meet on the tour. The car park is completely believable as a makeshift scientific research facility, and is divided into many different sets- which you are moved neatly around at the sound of a buzzer. The tour is well-organized in that there was no overlay with other groups (there were perhaps 8-10 guides and groups but you never bump into each other) and it doesn’t seem to impact your experience depending on which rooms you visit first. The guides are quick on their feet and pretty good at answering tough scientific questions on the spot- although the other half of our group did mention that their guide could not wait to be shot of them after the performance (apparently they had a lot of questions.)

The craft itself is actually a rather neat spectacle, as are the other alien beings that we encounter. The props are delightfully gaudy, the leviathan being a particular favourite. You are encouraged to do quite a bit of touching (particularly in the coral sex lab- no, really) but whatever you do, DO NOT STEP OUT OF THE WHITE LINES.

The tour meanders a bit, and while it is very enjoyable and there is quite a bit of fun to be had, after a while I started wondering where the narrative had gone, and what had happened to the plot. Fortunately an alarm went off frantically at this point, and all the voyeurs are gathered around the craft for a really clever and interesting finale.

Without giving too much away, there is a rather creative way of getting the people in the audience to evaluate human society, and the performance is quite mournful in how it projects what would be most likely to happen if aliens did make their way to Earth. I wonder if there’s a little subtext regarding immigration in here somewhere, as there is definitely an undertow of fear and distrust of outsiders.

It was a very fun evening. ImmerCity are not about to dethrone Punchdrunk of their immersive theatre crown, but considering that they have only been around since February of this year, and are absolutely nailing the site-specific aspect of immersive theatre, I’d highly recommended keeping an eye on this company- the only place they are going is up.

Crashed was enjoyable, fun, thoughtful, well acted, and a really clever use of space (heh) and time-keeping. My only suggestion for improvement is that they send the photos to guests afterwards as I have an idea that there was some hilarity to be had there. Go see this; it’s on in West London until July 27th, and will then be making its way up north for the Edinburgh Fringe.

You can learn more about ImmerCity on their website

UPDATE: They put the pictures on their Facebook page. WONDERFUL. 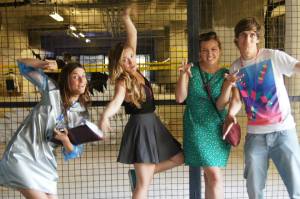 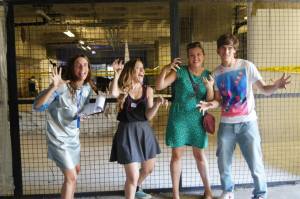