Halloween’s Immersive adventure was part theatre spectacle, part history lesson. It was a “ghost walk” of sorts, put on by UnrealCityAudio to introduce us to the “Ghosts of Fleet Street.”

The tour weaves its way around Fleet Street telling the story of the press and publishing through the ages. Along the route we meet several costumed actors, responsible for bringing to life the story in each area.

Now, there is something you should know. This is not a stuffy history tour. Dr. Matthew Greene is the closest I’ve ever come to meeting my fictional idol, Dr. Spencer Reid. Young, quirky, enthusiastic and knowledgeable, he’s an amusing and entertaining tour guide. You get the idea listening to him that, if allowed to continue talking, he’d never run out of information on the subject matter– nor would he run out of energy for it. The information is incredibly interesting, and creatively presented; knowledgable as he may be, the tour is not straight from a dry textbook. Instead, it is a warm mix of humour and fact.

The majority of the humour resides in the fact that the walk borders on hastily assembled pantomime. Actors misread the scripts in their own hands, cues are disastrously misinterpreted, no one knows their lines, and the over acting is incredible.

But oh my god is it hilarious.

The tour group- made up mostly of 20-30 somethings- is constantly in stitches. We have to avoid a dead octopus as it flies through the air, dodge bikes and buses (no health and safety here, kids), and the miscues caused by bicycle bells (and in one instance, Dr. Greene stopping at the wrong location) are phenomenally funny.

The best thing about the tour was how open and approachable it felt. UnrealCityAudio feels like a guy who loves history has rounded up a few of his friends to help him act out that passion. It’s fantastic fun and yet educational. You learn loads about the city while seeing the locations and buildings where the information actually came from, and there’s even a half pint of ale at the end.

But do note- its not for those who are a bit feint of Octopus. Bleugch.

Get tickets for the next Ghosts of Fleet Street tour here. 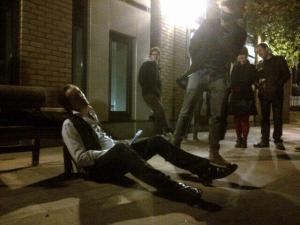 (Thanks to my buddy @enjoytheviewEU for the photo.)