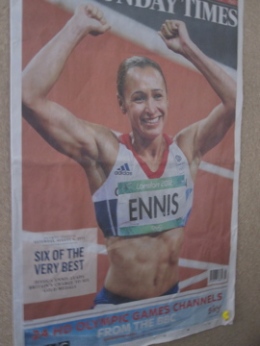 This is Jessica Ennis. She’s a gold medal winning British Heptathlon athlete and the reason I broke my foot. She is incredibly fit. I wanted to be her, basically, and running an hour a day every day for three weeks straight is apparently *not* the way to achieve that goal. So when Halloween came around, and I had to think up something I could be that would work with the giant futuristic cast on my foot, it was a struggle to think up an idea.

Robo cop? One of the Transformers? Neil Armstrong? A Skier? Nothing that really inspired me until I realized that considering how tough it was to work out enough to be Jessica Ennis, dressing up as her for a day would be a much easier way to realize my dreams. 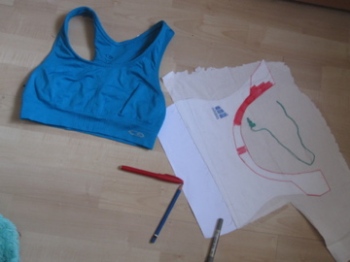 I took a sports bra, and some left over fabric from my day job (the Lush Tailor Made window) and traced out a pattern for the TEAM GB top. Since my printer isn’t working and I’m not going near my office until 2013, I then hand drew all the details for the top. That lion logo ain’t an easy thing to freehand.

I also drew her running bib, and by bizarre coincidence got sent an official London 2012 relay baton in the post as a thank you for volunteering for London 2012. Thanks Boris!

(Yes I know Jess wasn’t a relay runner, but work with me here.) 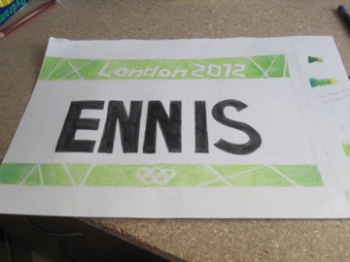 Sewed the fabric to the existing sports bra, and finishing off her paper running bib. 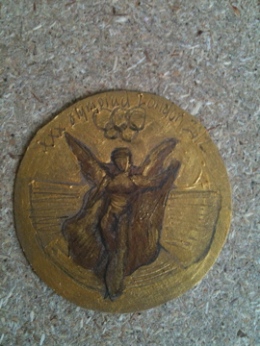 A gold medal made of acrylic paint and pencil on cardboard. It is fairly accurate, but really who would know that! 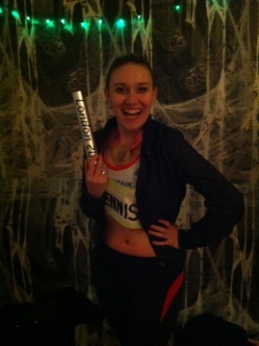 A bit of a rubbish picture, but the Jess Ennis costume in action! Got some good feedback from it, except to be told “if you had a tan you’d look just like her!”

There is a fine line between being accurate, and being a bit racist.

One thought on “Thanks Jessica! (Halloween Costume)”