I have an obsession with old tube stations and train stations. Since I’m still on sick leave with this silly foot, and can’t walk, I’m posting some adventures I’ve had over the past few years from when I could walk.

This first one is taken directly from a WONDERFUL book which I cannot recommend highly enough. It is called ‘Do Not Alight Here: Walking London’s Lost Underground and Railway Stations” and is written by Ben Pedroche. The book contains 12 extremely informative walks you can do around London to see old stations, lines, etc. It’s extremely easy to follow.

The first walk we did was Walk Number 10- from Park To Palace, Northern Heights and beyond

The texts below in blue, unless specified, are walking directions paraphrased from the book to correspond with the photos. Black text is added from other research sources or notes from having done the walk myself.

The GNR and LNER were the predecessors to what is today the Northern Line. In “The Northern Line, an Illustrated History” (TNLAIH) it is mentioned and shown as a proposed line on this map.

Disused-Stations.org also has a neat image of what it would have looked like on today’s map.

The area that this walk connects lived its life as several different bits and pieces of rail line that eventually formed one line.  The branch connecting Finsbury Park and Edgware had originally opened in 1867. This is the section that takes us from Finsbury Park, through Stroud Green and Crouch End, and then to Highgate. The extension from Highgate through Cranley Gardens and Muswell Hill to Alexandra Palace was added in 1873.

Passenger numbers were decent for the line, but competing rail services and the withdrawing of weekday services during World War I led to falling passenger numbers. According to TNLAIH, there were 43 trains per day coming through the Alexandra Palace branch in the early 1930s and in 1935 the London Passenger Transport Board made the announcement that they would incorporate this branch into the Northern Line (and would electrify the line, which was still operated by steam trains.)

Electrification of the line began around 1937. Unfortunately, as with many tube extension and modernization projects, the beginning of World War II caused the electrification of the line to be halted. The new Highgate station, as pictured in the illustration, opened in an incomplete state in 1941, but as the entire line had yet to be electrified, steam services were still operating on part of it, which had a negative effect on the numbers of passengers using the service. 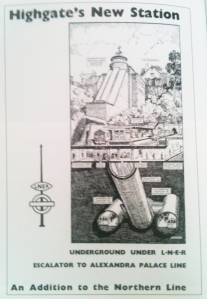 It was decided that because so few passengers were using the steam services, it wasn’t worth completing the electrification and the full incorporation into the Northern Line as LPTB had suggested in 1935. In 1954 the passenger services out to Alexandra Palace were canceled. Freight trains still used sections of the line until 1964, and tube stock was moved around on the line until 1970 (disused-stations.) All of the track was lifted in 1972.

In the late 1970s Haringey Council opened the former section of line as the Parkland Walk (although it was only “officially opened” in 1984.)

The directions provided by the book are great. I’ve watered them down a lot because you should buy the book- it’s full of details, and lots of historical information and context. Wear sensible shoes, especially if it has recently rained. There are lots of loose bits of gravel on some of the paths. Bring water. The walk says 2 hours in the book, and it was more like 3 1/2 for us- also the first shops we came to for water and ice creams (and a GREAT Oxfam book store) were all the way in Muswell Hill. A smart phone would also be advisable as there was a very tricky area.

Start at Finsbury Park station, and enter Finsbury Park. Walk through the park and stay left on the path. After a ten minute walk, there will be a set of gates on the left and a rail bridge. Cross this rail bridge, make a right and you are now on the route of the Edgware, Highgate, and London Line which was owned by the Great Northern Railway and later became a part of the London and North Eastern Railway.

Walk past the first bridge, and when you reach the second bridge you are on the spot where Stroud Green station once was. If you walk down the path on the bank on the right to the road, and turn left you were will see the old station building.

Head back up to the trail and continue onto the bridge. You can see some traces of the platform but not much of it remains. 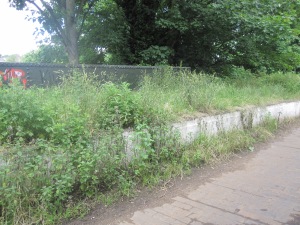 Throughout the walk we did see a lot of random pieces of railway paraphernalia, including cable holders (presumably from the electrified stretches of track) which I very seriously thought about nicking to hang in my house. Weird? Also a lot of the Parkland walk elements are built with old railway sleepers, which is a very good way to upcycle the railway waste!!

Continue under two bridges, and just before the next footbridge, make sure you stop and look right to check out this artwork by artist Marilyn Collins.

After the footbridge, you will come to Crouch End station. You can clearly see, and walk on, the old platforms. At the end of the platforms, look up. This is all that remains of the main station building. 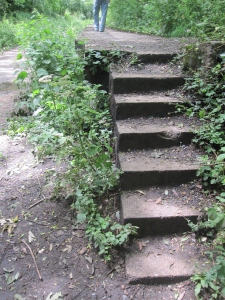 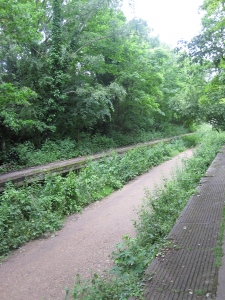 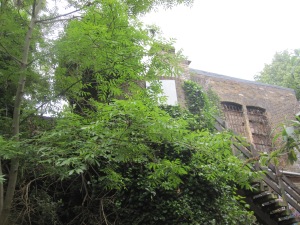 Keep walking until you reach the abandoned Highgate tunnels.

(These are actually rather overgrown and not terribly easy to see from the path. It gets very Mr. Tumnus-esque and there is a signpost, but the path turns a bit before it. Carry on straight down the slight remains of the path and the tunnels will reveal themselves!) 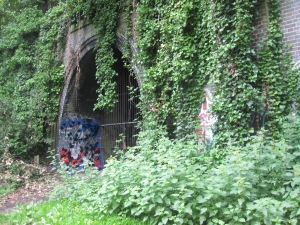 Head back to the path that went off to your left shortly before going to the tunnels, and leave the Parkland walk going right on Holmesdale Road, then left up the hill, and right on Archway Road. Cross Shepherd’s Hill and walk down into Highgate Station car park. Walk through the tube station, take exit 2, and walk a few metres up the steep footpath. To your left is the now abandoned Highgate (High Level) Station.

Continue on footpath to Wood Lane. Turn Right on Muswell Hill Road. You will come to Cranley Gardens, the original location of Cranley Gardens station. There are no visable traces of it. Take the path that runs along the station site, go under the road bridge, and re-join the Parkland walk.

(We got lost here. Really lost. There are a lot of entrances to the park. This is where the iphone came in truly handy, as Cranley Gardens is NOT well identified.)

Walk through the gardens and over the viaduct.

The viaduct views are fairly outstanding and it is remarkable how far across London you can see.

The Parklands Route ends shortly. Go through the subway under Muswell Hill, and follow the path towards the right. Muswell Hill Primary School sits on the former site of Muswell Hill Station. Turn right on Muswell Hill, head up the hill to Dukes Street where you’ll make a right. Stop at the junction of Grove Avenue, look right into the entrance of Alexandra Park and you can see the old rail bridge which carried the line to the palace.

Continue on the street then turn right into the Avenue. The old Alexandra Palace station is still intact and visable at the foot of the Palace. 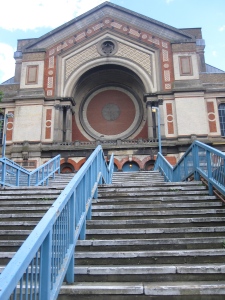 Go back down the Avenue away from the palace, and turn right on Vallance Road, right on Talbot Road, and right on Alexandra Park Road. Bear left on Palace Gates Road. Walk along the left hand side of the road to see Bounds Green Depot and the former site of Palace Gates Station. 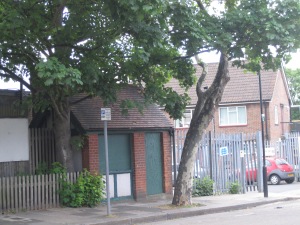 This may have been a coal shed at Palace Gates station.

Continue along Bridge Road, turn right at the end and head straight to the current Alexandra Palace station. This one is still in use and offers very frequent services back to Central London. 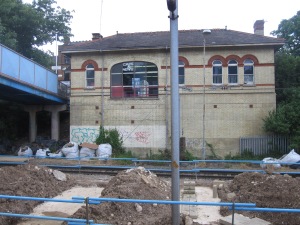 For further reading, I highly recommend:

Do Not Alight Here, Ben Pedroche  Purchase at Foyles

Disused-Stations.org.uk  -This one also has a fantastic selection of historical photos of Crouch End station