The other day I skyped my darling sister Amanda Pulham, who happens to be both a more talented artist than I am, and funnier than me. I know, right? Some people get dipped in all the right gene pools.

She wished me a Happy Birthday, and then said “Or as the Koreans say, ‘Congratulations Sea Salt!'”

I told her I didn’t think Koreans said that, to which she responded “According to Bing Translation they do!!!”

Now, I always enjoy a bit of Bing translation on facebook. Finally my smarmy multi-language friends can’t have their little secret messages in “code,” safe in the knowledge that in order to know what they are saying, I’d need to copy and paste the text and put it into altavista babbelfish. It’s messy. Now I can just click ‘see translation’ on facebook and Bing will translate everything for me, from their language straight into English. Which is great!

However, my sister and her friends noticed it does not work with the Korean language – either that or our Korean friends are on ANOTHER LEVEL ENTIRELY. Here’s some brilliant examples they’ve collected of Bing’s (lack of) translation:

How is this even a conversation? 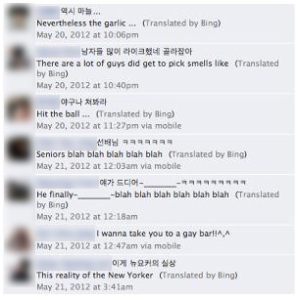 Or just gives up in general:

Hull, the Wicked and Evil to Celcious

So it goes without saying that my new favourite phrase is “translated by bing.” Most of the other languages seem to translate really well (with the exception of German one that described the lush German marketing manager as the ‘fire can manager’) but I can’t help but think that something has gone a bit wrong at Bing headquarters.

That, or they’ve hired a Korean translator with a wicked sense of humour.

(Thanks to Michael W, Ali W, and Amanda for my enlightenment)

One thought on “‘Translated by Bing’”