Punchdrunk’s Drowned Man is an epic spectacle. I saw it during preview week, which you can read about here, but decided once was certainly not enough and saw it again last night.

The show is an incredibly staged immersive performance that allows you to travel through a world while turning it upside down. You can explore to your heart’s content, whilst a tragic love story unfolds around you. This is brilliantly danced and acted out by a series of dancers and actors.

The event is described as:

Have you ever seen nature inside out? When the sun stands at midday and it’s as if the world was going up in flames?

Step into the world of Temple Pictures where the Hollywood studio system meets a forgotten hinterland filled with dreamers who exist at the fringes of the movie industry. Here, celluloid fantasy clings to desperate realism and certainty dissolves into a hallucinatory world. Inspired by Buchner’s fractured masterpiece Woyzeck, this theatrical journey follows its protagonists along the precipice between illusion and reality.

I adored it the first time, but after seeing it a second time, my mind is well and truly blown. This is absolutely incredible theatre. It transcends the walls of the disused fire station. This is the closest you will ever come to stepping though the wardrobe and into Narnia. There is a world full of wonders behind the lift doors. I had several gasp out loud moments; many moments of breaking into a brilliant smile, and some hard-earned light bulb moments.

There were a lot of improvements made to the performance since the first time I saw it – which was, admittedly, during preview week at a drastically reduced rate, so I will forgive them their initial faults (few as they had been.)

Firstly, they now give you a bit of backstory before you head in. In the lift, you are given information about the two sets of couples – as well as a little leaflet to help you follow the story for each couple. This is very, very useful. You are encouraged to spend your evening as you chose – and openly encouraged to ditch your friends and chose your own path.

Once you step out of the lift your time is completely and utterly at your disposal. You can sit and wait for performances, go seek them out, or spend your time devouring information and clues by rooting through drawers, opening envelopes, reading books, and trying to find ways to disassemble the phone booths (hint- if you find “the truth” open it, even though it is sealed. Yes, open the wax seal as well.)

During the evening, performances take place constantly over the four floors. The actors then split off in different directions, leaving you to choose to chase them, or continue as you were going. You can leave a ‘performance’ at any time. The performances are wonderful – an energetic mix of dance and story telling. I found myself yet again blown away by the talent of the actor playing – I believe – “Andy” (good luck finding a cast list online btw, but there is one as you enter the building.) You have to see this man dance through trees, lose his mind on a beach, and dance up the walls of a staircase. He will absolutely blow your mind.

Dialogue has been added to several interactions, which makes the piece much stronger. There was also much stronger interaction between the actors and the audience. I was roped into helping the seamstress move dresses and purses around, which was great fun. I was also singled out to receive a message whispered frantically in my ear from Mr. Stanford whilst he was lying on the floor – wonderful stuff. He then bopped me on the head several times to make sure the message sunk in. The audience play a really interesting role when Andy experiences what could be hallucinations and screams for people to stop following him. But is he hallucinating? After all, the audience are real, and we are indeed following him – it’s complex stuff.

One thing I was surprised about was the sheer volume of things to see. There were several scenes that I had seen the first time that I really wanted to re-visit and see again. I failed. I didn’t manage to see anything for a second time. I spent the entire three hours seeing different scenes, reading different letters, and – especially shocking- finding different rooms. The basement floor is an insane labyrinth of corridors, and I went down there much earlier than last time (when I got left behind there after the show– not even kidding) and found a vast array of things to see. Keep an eye out for secret passages and tunnels as you move around the entire space.

It’s clever how people are moved around by the actors in order to ensure there are crowds gathered for the crucial scenes, but it is equally easy to see how it’s possible to get though the evening without seeing any of the crucial scenes. If you miss some of the meat and potato explanation scenes, the entire evening could very well not make sense to you.

The only complaint I have with the moving people around is when, at the very end, everyone is gathered together to watch what I assume is a very epic final scene.

I assume it’s epic, as I haven’t seen it yet.

I got left behind in the basement on my own the first time, and this time I was in a phone box upstairs and came out to find everyone gone. After a few minutes of panic, I was ushered briskly downstairs but could not find the stage. Cue 15 minutes of franticly running around, alone, in the dark, banging on doors and trying to get out. A friendly employee found me, and after I screamed (she snuck up behind me in the dark- who does that) she kindly escorted me to the stage….where I yet again caught only the last few minutes of the finale, bizarrely with one of the actors holding me rather tightly from behind. As you do.

So for those of you keeping score, I’ve been to Punchdrunk twice now, and seen zero finales.

Which is fine, as I hear the third time’s a charm- and yes I have a feeling I will be back again. This is addictive stuff. 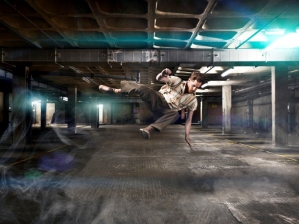 One thought on “The Drowned Man and The Epic Second Round”