I made my first visit to Nunhead Cemetery during Open House London, 2013. The cemetery is open regularly, but on this occasion the crypt and chapel tower were both open also – a very rare treat!

In the 1830s it became apparent that London was running out of room to bury its dead. The decision was made to move the internment of bodies to more spacious areas outside of the centre of London- these included Kensal Green, Norwood, Highgate, and Nunhead.

In 1839 53 acres of land acquired by the London Cemetery Company were to become the site of Nunhead Cemetery. The land was and is on a hill, and provides excellent views of London.

The land was consecrated on 29 July, 1840. The lodges and gates were designed by James Bunstone Bunning.  One of the lodges is still standing, as are the gates- the other lodge is derelict, but currently being rebuilt and under immense scaffolding. The chapels were designed by Thomas Little, and although the roof of the chapel is now gone, the stone structure still remains in remarkable shape.

Business was not good for The Cemetery of All Saints, Nunhead in the first year of operation. According to Necropolis, in the first six months a mere nine burials took place in the grounds- and the number only raised to 113 by the end of that first year. After their initial struggles, business picked up – which is very clear to see by the sheer volume of headstones competing for space in the overgrown woods.

People were in the habit of spending heavily on funerals when they were able.  There were different ways to be buried; either in the ground, or by being interned in the catacombs or crypt. Being placed in the crypt was considered the more valuable, and expensive option owing to Victorian beliefs regarding the dead. The Victorians believed in the idea of a good death, and that there should be a smooth transition from your death-bed to your grave.

“Internment in a brick vault is the most costly, and is only suited for those in comfortable circumstances. The price….for internment in the catacombs the lowest charges are… Nunhead, £17 10s… it must be remembered that additional expense attends internments…owing to the regulations, which require lead coffins to be used.” – Cassell’s Household Guide, Vol. 3 p. 292

The cemetery was full by the mid-20th century, and closed in 1969. At that point it was abandoned and neglected. The forest gradually reclaimed the earth, and the cemetery sat alone for years (at which point it also experianced a major break in to the crypt, as well as an arson attack that destroyed the roof.) In the 1980s, the Friends of Nunhead Cemetery took over the cemetery. The cemetery was re-opened in 2001, and is now a Local Nature Reserve as well as a beautiful site of rest.

Here are the photos:

The gates to enter the cemetery:

Tombstones grown over by nature: 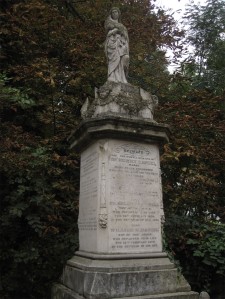 The Chapel, which was damaged heavily in an arson attack in the late 1970s. 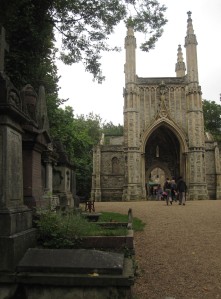 The tour then led us down to the crypt. Sadly, during the late 1970’s the crypt was broken into and completely ransacked. Valuables were stolen, and bodies/remains were thrown carelessly across the crypt. They are quite sure they’ve rematched everyone’s pieces back together, but it cannot have been a pleasant job. 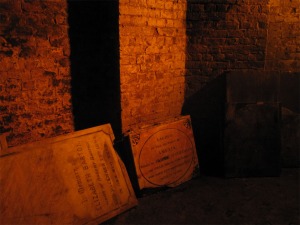 Two examples of coffin in this one, wood (on top) and lead (bottom.) I’ve been in many a crypt but did not expect to be quite so intimate with 150 year old bodies.

The view from the tower: 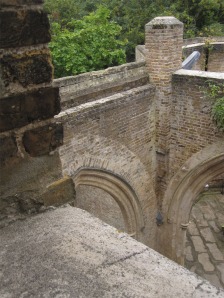 Gargoyles, to ward off evil spirits: 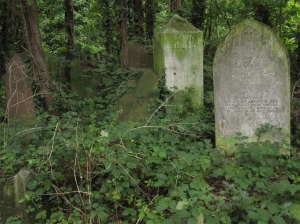 Necropolis: London and Its Dead, by Catherine Arnold

You can find out more about the cemetery from Southwark Council here.

And learn about and join the Friends of Nunhead Cemetery here.

One thought on “The Tower, the Crypt and the Wardrobe – Nunhead Cemetery”