My second ‘Immerisve Theatre’ adventure in New York took me to the Arts Nova production of Natasha, Pierre and the Great Comet of 1812. The performance is a musical adaptation of War and Peace by Leo Tolstoy. That in itself is a bit of a daunting premise, but it’s a surprisingly lively romp though what should be a very depressing 17th century Russia.

The story is of Pierre, a depressed aristocrat, and of Natasha, a beautiful young woman whose fiancé Andrey has gone off to war. As Pierre drinks and contemplates his futile existence, Natasha meets young womanizer Anatole, and calls off her marriage to Andrey. What follow are revelations for both Natasha and Pierre mixed in with the joy and sorrow of the novel.

The entire show is done through song- there are no spoken parts, and even those parts that veer close to speech have a musical score behind them. The music is played by a live band who, although quite overpowering if sat at the bar, are a delight to listen to. The vocal quality does differ from character to character, but both Amber Gray as Helene and Phillipa Soo as Natasha (pictured) are lovely to listen to, and Lucas Steele hitting his “PETERSBERG” was a highlight for me. 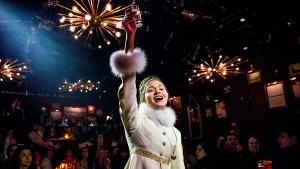 One of the best things about the production is that it has somehow made War and Peace not only accessible, but wonderfully easy to follow. You are given a program with a useful family tree, and the opening prologue song hilariously provides all the information that you will need to enjoy the show, including gems such as:

“This is all in your program… you’re gonna have to study up a little bit if you want to keep with the plot. This is a complicated Russian novel; everyone’s got nine different names.”

The fun it pokes at the bleak hopelessness of the Russian epic novel is equally funny – Pierre opens with the line “It’s dawned on me suddenly—and for no obvious reason— that I can’t go on living as I am.” Andrey’s family is referred to as “totally messed up,” “Helene is a slut” and in Natasha’s moment of despair she wails and then, in song, announces she is so sad that she will go upstairs and try on dresses. The satirical tone of the production’s adaptation of Tolstoy will appeal very easily to the 20-somethings in the audience.

The venue is, quite fittingly for such a show, bizarre. From the outside – a flimsy tent in a parking lot, surrounded by the flashing and bright lights of Broadway musicals. But from the inside, we’re suddenly at the opera (“you are at the oprraaaa”) in a structure with heavy red velvet drapes, gilded framed paintings, and beautiful modern chandeliers which later serve well as a comet. This creates a building with not only a solid structure, but also the air of walking into a cabaret club which has been serving patrons for near on 100 years.

Seating is scattered throughout the venue, and done around the edges in a gradual amphitheater style and the performance takes place in and around the diners—sometimes on the floor, sometimes on raised platforms and the bar. Be prepared to spend a lot of time shifting around for the best view as the action darts from side to side.

You can eat while you enjoy the show, but the food is expensive, particularly given how expensive the tickets also are (although I have never seen such a quantity of nuts in my life) and my kale salad, while delicious, had a piece of wood in it. I dunno, maybe it’s me, but if I’ve bought a $22 salad, maybe you could not put wood in it?

It definitely makes for an interesting  day or evening out. The cast are likeable, the show is really very funny, and the songs are catchy and enjoyable. CD’s are available of the soundtrack, and it’s also available on Spotify—which is fortunate, as I’m still happily humming along to “Letters.”

The show is good fun— but a dry appreciation of deadpan humour is a must to enjoy it. Natasha, Pierre and the Great Comet of 1812 has more of a cabaret feel to it than that of an immersive theatre show, but the atmosphere created around the audience really is done very well.

The show is running in NYC until January 19 2014, and you can buy tickets for it here.