The latest theatre adventure took me to The New Wimbledon Theatre for their performance of Aladdin. Now, as somewhat of a foreigner to British shores, pantomime is not something that is overly familiar to me. I’ve been a couple of times, but I find the productions so bizarre and the entire concept to be very alien to me.

This performance of Aladdin has all the typical characteristics of pantomime fare. The amount of glitter and excessive use of sequins dazzle and stun the eyes. The interpretation of the story is appropriately absurd. The jokes are both hilarious and groan-worthy, with the local jokes in this Wimbledon production being really very funny. Topical local references to Wandsworth, Merton and Southfields (“somewhere really boring”) are a delight as is an early rhyme from villain Abanazar – “I could do something really mean; like stop the district line after Parson’s Green.” Proper funny—and true.

The scenery is very well done. As mentioned before, the amount of glitter used is somewhat terrifying, but every scene is an outstanding visual spectacle. The market scene, in which layered fabric banners of oriental writing and drawn lamps hang down from the ceiling, is lovely. One dimensional ‘carts’ of fruit and veg and overturned buckets ‘filled’ with goods for sale give the scene a surprisingly convincing and artistic feel.

The palace scenes are covered in glitter and sparkles and convincingly give off an appearance of opulent wealth. Everything is bright, and shiny and deliciously gaudy.

The cast are enjoyable, but no one shines quite so brightly as Claire-Marie Hall as Jasmine. Beautiful, and with an outstanding voice, Hall brings to life the role of the princess in a charming way. Her wide-eyed and energetic actions easily charm the audience, and we all cheer for her in the end, even though she could probably chose a much better suitor for herself than the self-absorbed and arrogant Aladdin.

Jo Brand is this year’s celebrity addition to the cast, and her lackadaisical, barely-interested approach to playing the Genie of the Ring (wait, there are two genies?) is very funny. She regularly pokes fun at her weight – shoving aside the image of a bond girl-esque silhouette to make an entrance is particularly funny – and her deadpan delivery of lines is really clever contrasting material in such a high-energy, over-the-top, and gaudy production.

The most bizarre and, potentially, most enjoyable bit of the entertainment is the decision to include world-famous dance troupe ‘Flawless’ in the production as the Peking Police Force. It’s an odd call for a street-dance group to take centre stage in a pantomime, and the popular dance music was possibly not for everyone in the crowd, but they were an outstanding breath of fresh air for the pantomime world.

Their dancing was energetic and sharp, and they did a number with the lights completely off and LED strips attached to their bodies which was clever and creative. It was also refreshing to see that with the inclusion of Flawless, the Wimbledon Theatre actually offered quite a diverse casting—again, something unusual on the pantomime circuit. They also really seemed to be enjoying themselves, which added to the audience’s level of enjoyment.

It was a fun, family-friendly piece of theatre which really constitutes of typical—yet well-executed— pantomime fare. It would be difficult to emerge from the theatre without a smile, and as I skipped, happily whistling, down the front steps of the theatre I realized I was surrounded by elderly woman, all of whom were talking about the bequests in their wills for when they die.

Below are some sketches of characters, settings, and scenery. 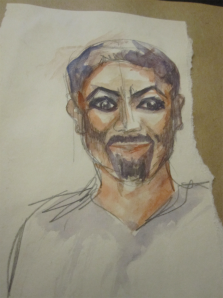 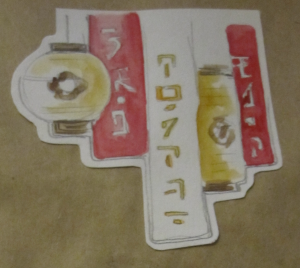 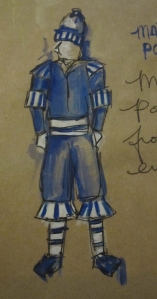 One thought on “I saw Aladdin OH YES I DID”