The Odyssey by Homer– Performed by The Factory, at the CLF Art Cafe

It’s hard to see how an evening of acting out every book of Homer’s The Odyssey could be an evening of fast-paced, clever, interactive and humorous theatre—but it genuinely is all of the above.

The Factory bill the show as a “story that changes every time it is told” and, although a bold premise on the surface, given that so much of the show is improvised and dependent on ‘fate,’ it’s actually a very good description of what occurs over the evening.

The show takes us through the 24 books of the Odyssey, with each book being one scene. The tone or style for each scene/book is determined by an action randomly picked out of a bowl by an audience member prior to the scene beginning. Scene options include being done entirely in iambic pentameter, in 60 seconds, or with actors only speaking 3 words at a time (my personal favourite.)

Because of the unpredictability of this, the actors have to be prepared to react to anything. One of the styles is “ancient Greek” and one has to imagine that this talented group of performers is actually prepped and ready to do any one of the 24 books in ancient Greek.

They roll with the punches in fantastic form, and one of the great things about this performance is how wonderful this cast is. Everyone brings something clever to the table, and all think quickly on their feet. The players involved are warm, personable and look as they are enjoying themselves tremendously by the challenges presented by the unpredictable format.

There is a lot of scope for audience participation. As well as plucking the challenges from the bowl, the audience also assists in shaping the story during the ‘advice’ section (which is really very funny.) Be warned though; there is a scene that involves a member of the audience joining centre stage. The actors interact with the audience at the beginning of the show and also in the interval in order to know who would be a good selection for this portion of the show. For our show, they picked our mouthy friend Ollie (making most of his life dreams come true) and what ensued was genuinely funny – even for the audience members who didn’t know him.

There is so much to love about this adaptation. The harmonizing of the singing is absolutely outstanding, as is the width and breadth of the use of minimal props. Each actor has one tall wooden staff and one rather rustic-looking hula-hoop. These serve as boats, weapons, lotus flowers, and, really amusingly, bowls of sausages. Another interesting element is that each actor takes it in turn to play Odysseus, which adds a strange richness to the character.

It is an improvisation performance, and as such, it is bound to occur that at some point someone does say the wrong thing; this unfortunately did happen at one point where a character’s masculinity was being challenged, and he was referred to using a gay term in a negative way. It was probably a slip of the tongue, but it just didn’t have a place in such an otherwise well-thought out theatre production.

Apart from that, I have very little I can fault about the production. It is, naturally, long, but it never feels slow or overly drawn out—apart from the scene where they actually read from the book. It is a wonderfully raucous ride from start to finish. It is the most clear, easy to follow, and humorous interpretation of the Odyssey that I could ever have imagined.

This is a cast that could comfortably communicate anything they wished in a brilliant and innovative way.  Quirky, clever and at times exceedingly touching (the actor’s personal stories are really very moving)— this is wonderful theatre.

The Odyssey is still running at the CLF café until 25th January, and at £10 a ticket, is outstanding value. Buy tickets here, and you can find The Factory on Twitter @_Factory 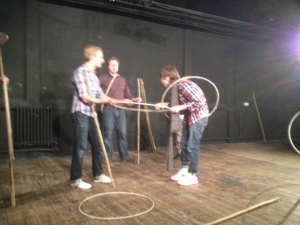