The latest immersive theatre adventure took me to Greenwich for The Spectators’ Guild’s wonderful performance of Thomas Otway’s Venice Preserv’d– a “fully realised immersive world” where you uncover “a tale of love, corruption, friendship, rebellion and betrayal.” 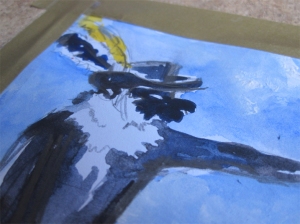 The evening starts off with a festival. A team of gaudy, colourful and excited Venetians – with some somber interruption – lead the participants on a ¾ mile parade to a half-built apartment complex near Greenwich. This should be a strange venue to turn into a theatre, but it is used cleverly to create a vibrant Venice— and soon transforms into a dark and dangerous world. Rather than change sets and scenery, the audience move from one area of the complex to another – and the change in location adequately reflects the change in scenes.

The story begins next to the Thames as Pierre and Jaffir begin to plan their revolt and make their pact – and just as the sun starts to set and the audience begins to feel a chill, we head indoors to a stage set as both a seedy pub and also the holding place of Belvidera. Cozy blankets are provided for the audience, and you are able to then take blankets around with you for the rest of the evening to help you stay warm.

The casting in this play is near to perfect. Jessie Buckley (seen last season as an ideal Miranda in the Tempest) absolutely shines as the virtuous, brave, yet heart-sick Belvidera. Her scenes with the internally tormented Jaffier (a moving and passionate Ashley Zhangazha) were breathtaking. When her character begins to fear Jaffier it is incredibly moving, and her tortured emotions as she screams and battles the confusion of her lover’s conflicting feelings towards her, and her fears for their lives are brought to life with alarming conviction.

Ferdinand Kingsley brings a youthful energy to Pierre, and does well to balance his rage at Jaffir’s betrayal with his own feelings towards loyalty and the seriousness with which he regards his friendship with Jaffier. In many ways, the real ‘love story’ of the play is not just between Belvidera and Jaffier; it is also the connection between Jaffier and Pierre which leads both characters to engage in the oath that forces Jaffier to have to choose between his wife and his friend. The indecision and guilt at having to make this decision, and the refusal of Jaffier to stick to one plan over another is brought to life very well by the aforementioned Zhangazha.

It is a strong performance and is only let down slightly by the odd juxtaposition of the opening parade against the dark and tumultuous subject matter of the play. The parade and opening dancing and singing felt very much like a gaudy carnival, yet the play was brilliantly acted and tackled some very harrowing subject matter. The two halves didn’t completely blend into one, but that being said, it was an excellent performance.

The setting is also well thought out, and the creative design is key in bringing the story to life. The pub room and senate are clear favourites; in one, old chairs are stacked haphazardly up to the ceiling, and a clever swap of lighting and screens allows for the play to move back and forth from the plotting in the pub to Belvidera’s own plotting in her chambers, and also the chambers of the smart and seductive Aquilina (a lively Ayesha Antoine) – for some much needed comic relief.

The most stunning room, both visually and also in terms of atmosphere, is that of the senate. As you enter the darkened room, you are given a hooded red robe to wear, and led to amphitheater seating in order to play the role of the assembled senate. A brilliant use of projectors and lighting changes allow for a haunting stage set.

It’s a long evening, but a very enjoyable one and ends with the audience members back outside—each holding a lantern—for a stunning finale. It’s gruesome, but also chilling and beautiful– and well worth seeing.