Last Sunday I had the pleasure of seeing Jeremy Herrin’s adaptation of The Tempest of London’s Globe Theatre. I previously had seen both Tim Carroll’s and Lenka Udovivki’s versions of the Tempest, both excellent productions, so approached the show thinking it would be hard for Herrin to top the previous versions. The truth is, he made it look easy.

“Prospero, Duke of Milan, usurped and exiled by his own brother, holds sway over an enchanted island. He is comforted by his daughter Miranda and served by his spirit Ariel and his deformed slave Caliban. When Prospero raises a storm to wreck this perfidious brother and his confederates on the island, his long contemplated revenge at last seems within reach.”

This version of The Tempest is exceedingly well cast and imagined. The cast are an almost unanimous delight. Trinculo with a Geordie accent makes the drunkard’s role endlessly amusing. Ariel is played by Colin Morgan (of Merlin fame) as one of the more flamboyant Ariels I’ve seen; appearing on stage in an outfit that would look right at home at G-A-Y on a Saturday night and moving with an ethereal and light-footed ease throughout the Globe.

The smaller roles of Antonio and Sebastian are not as strongly acted, and for this reason the plot of trying to kill Alonso comes across as decidedly weak and unconvincing. This production could have carried on just fine without even including the subplot, as it was but a minor diversion to an epic adventure of a play.

In contrast, James Garnon as Caliban is excellent. His posture, gait, and positioning never falters and allows him to be terribly convincing as a monster. There is something inhuman about his performance and his suffering (particularly his walk, which lends credibility to his having to remain barefoot on hot sand) is palpable and entirely believable.

The choice to use the rather young looking Jessie Buckley and Joshua James as Miranda and Ferdinand respectively, adds a conviction as to the naivety of young love. Ferdinand in particular is played out not as a strapping and desirable young hero, but rather as an enthusiastic and wondrous child- and it works. Miranda shows a delightful tomboy nature, one that you’d imagine a girl growing up on an island to have. It’s refreshing to see her not swathed in white fabrics; but rather wearing clothes she can move freely in and move around with no airs or graces. She has the temperament of a child; as she would have growing up in such isolated conditions.

Although well acted and imagined across the board, the show belongs to Roger Allam ‘s stoic Prospero. He is a man clearly in control, but who is delightfully infused with a dead pan comic delivery which adds much to his conviction of his superiority over others (“and who put you there?”)

The play is superbly imagined, and with minimal scenery, paints a convincing world. The jungle-gym settings work well for the daintiness of spirit Ariel; the added props for the terrifying visions are imaginative and frightening, and the banquet’s ‘surprise’ caused gasps to ring out throughout the Globe.

The only fault I found was with the opening. There is something very clever with ropes and choreography to illustrate the shipwreck, but the movements of the model ship don’t live up to the desperation and violence experienced by the actors on stage. In this respect, I’m more partial to the opening of the version I saw in 2005, where the shipwreck was told using a chessboard as its only prop.

The play also leans decidedly towards humour over deep meaning, which leads to a very enjoyable evening. The Tempest would be a great starting play for someone not too familiar or fond of Shakespeare, as it’s incredibly clear, direct and easy to follow.

The Tempest runs until August 18th– and is filling up quickly. I’d recommend sitting so you can see the left side of the stage (stage right) as there were two rather funny things (particularly the sword part) done on that side that did not appear to be visible to those on the other side of the stage.

Prospero tells us that “we are such stuff as dreams are made on,” and this adaptation ’tis but a dream. Go see it. 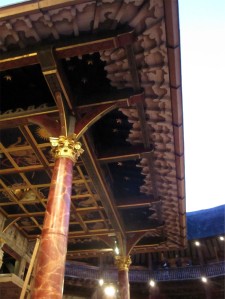 “O, wonder!
How many goodly creatures are there here!
How beauteous mankind is! O brave new world,
That has such people in’t!”