This week’s immersive theatre adventure took us to the foot of the Oxo Tower to see the second round of performances from Phillip Pullman’s Grimm Tales book. The evening is an immersive telling of six eerie tales from the book brought to life in atmospheric rooms by exceptionally talented storytelling actors.

The first instalment of the Grimm Tales performances, which you can read about here, was excellent. It took place at the Shoreditch Town Hall – a suitably rustic and run down building which allowed for an ideal setting to bring the tales to life. The danger in sequels is that you always have the worry that they may not live up to the joy of the original – so how did the second instalment of this production fare?

Firstly, the Bargehouse is a perfect venue for the tales. It’s a rambling and slightly crumbling building with just enough historical ambiance, and Grimm Tales makes full use of the many floors and staircases to create a mysterious and haunting world. The evening is divided into the same format as the previous version: attendees are divided into two groups, and each group is expertly led around the building to witness six performances of tales from Phillip Pullman’s Grimm Tales book.

The tales are acted out in rooms which are devised to let you become fully immersed in the storytelling – sight, sound, touch, and smell are all catered for as you enter each story’s world. The ground in most rooms is covered in a type of mulch, either wooden or rubber, and it gives the illusion and the sense that you are walking through a forest into said worlds – and also that your feet are not quite on steady or even ground. Bare lighting fixtures hang from black cables to light the scenes and haunting, rusting artefacts decorate the interiors.

Upon entering each room there’s a soundtrack of buzzing and humming – imagine a light that’s struggling to stay lit – while the actors guide you to your viewing areas and set some back story for each tale. Once everyone is in position there’s a louder hum, a flash of lights, and the story begins. The actors take it it turns to read out the story’s text whilst acting it out, and they are collectively a captivating troupe of storytellers.

It’s wonderfully creative and imaginative theatre which is set in a visual spectacle. The acting is great, and there is so much to look at whilst the plays are taking place. The stories chosen, although many of which are rare and slightly… odd, are cleverly told and enjoyable.

It’s not fair to pick favourites, but The Frog King is my pick of the performances. The room is a sweaty Louisiana bayou with moss traipsing down from the ceiling. The voodoo dance at the beginning is haunting, eerie, and perfect, and the use of costuming is excellent.  Faithful Johannes is also very enjoyable (and strange) and the introduction of the golden princess is absolutely beautiful.

It can, at times, be hard to hear and see everything in the performance – some of the pieces stretch across rooms, and there are pillars in the performance area of the Frog King room – but the actors do their best to make sure everyone sees exciting and wondrous bits of the action.

The costumes provide even more delight, and the stage setting is exquisite. After the performances conclude, the audience are invited to move around freely within the space (well, mostly freely – we were NOT allowed back in the hallway of quotes, which was a true shame) and at that point there are several more secret spaces and fully dressed rooms in which to explore and play (hint – think Narnia.) There isn’t time to see all of it before being ushered out (apparently there are three bars; we only found two) and as we hit the streets we were amazed and shocked to find that we’d been inside the Bargehouse for the performance for over four hours.

This performance is so inviting and enjoyable that the time spent seeing these tales brought to life simply flew by. 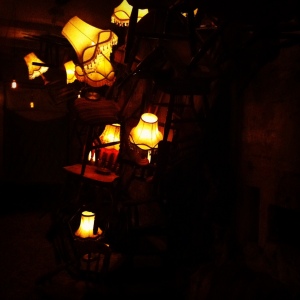 Grimm Tales is running at the Bargehouse until 15th February, 2015. For more information and tickets, please click here. 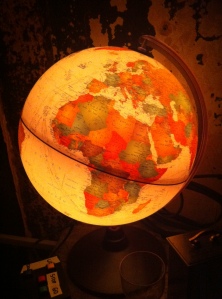