This year my Mother, who means well, wanted to take a family photo for her Christmas cards. It seemed like a good idea, so my sister and I sat down for a little family photoshoot in September.

Now. I don’t know if you’ve ever needed to get a Bouvier de Flanders and two possibly hungover 20-somethings to try to pose for a photo before, but this is what the majority of the Christmas photos looked like: 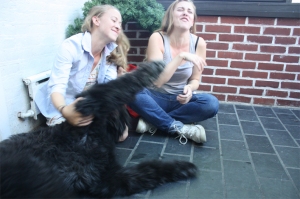 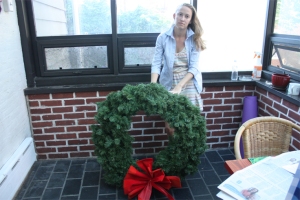 Not exactly Xmas Card material, you see — and Team Pulham needed a Plan B!

Fortunately I had done some previous illustrations for a good friend’s wedding, so I set out to draw myself, my sister, and the family bear instead of using a photo. I did it by tracing the basic outline of one of the decent photos of my sister and myself in Illustrator, and then adding in our features and drawn elements. 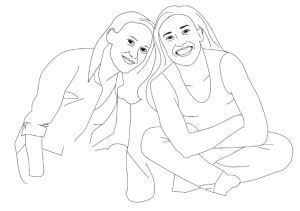 The line drawing was then popped into Photoshop, and the skin tones were added using the brush tool and a very low percentage of opacity in order to airbrush the skin colour layer by layer.

The process was then repeated for the lips, hair, and also the clothes (in separate layers, for easier clean up!) 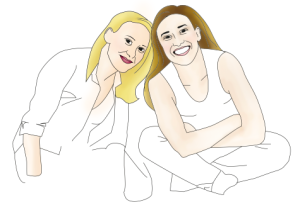 Then the process moved towards the dog. I had never drawn a dog in this manner before, but found that a bigger brush was ideal for getting the roughness of his fur. 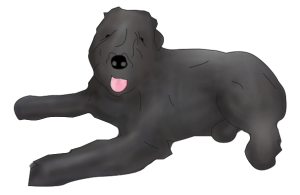 Then came the merging of the dog and the humans. Not in a creepy way (except I noticed later that after I flipped the image, it really looked like my sister’s arm was up the dog’s butt.) 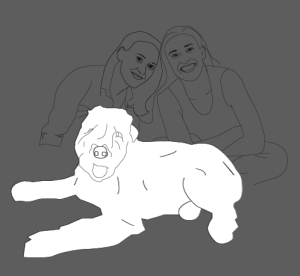 The joined colour version – I ended up copying and pasting a duplicate of the colour layer to make the colours on my sister and I pop.